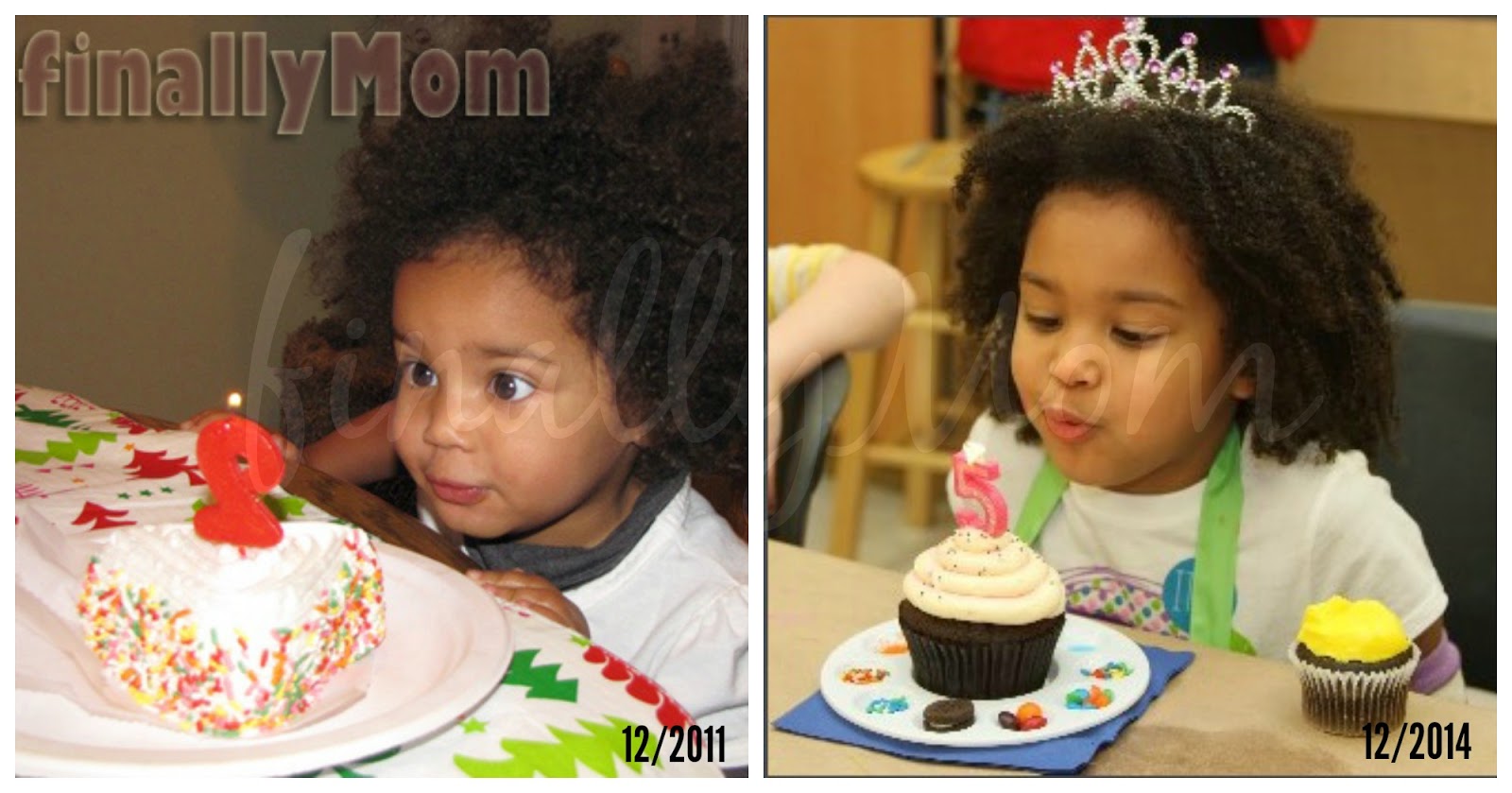 gah. look how little she was!
Written by christina at 9:38 AM 2 comments:

at some point, i hope to share this via video:

other interviews include:
wow, i can't believe how big she's gotten-- especially when compared to the other interviews!
Written by christina at 9:57 AM No comments:

Email ThisBlogThis!Share to TwitterShare to FacebookShare to Pinterest
Labels: 5, interview

eek, Lovie's been five for a week now and i forgot to interview her... must do tonight. 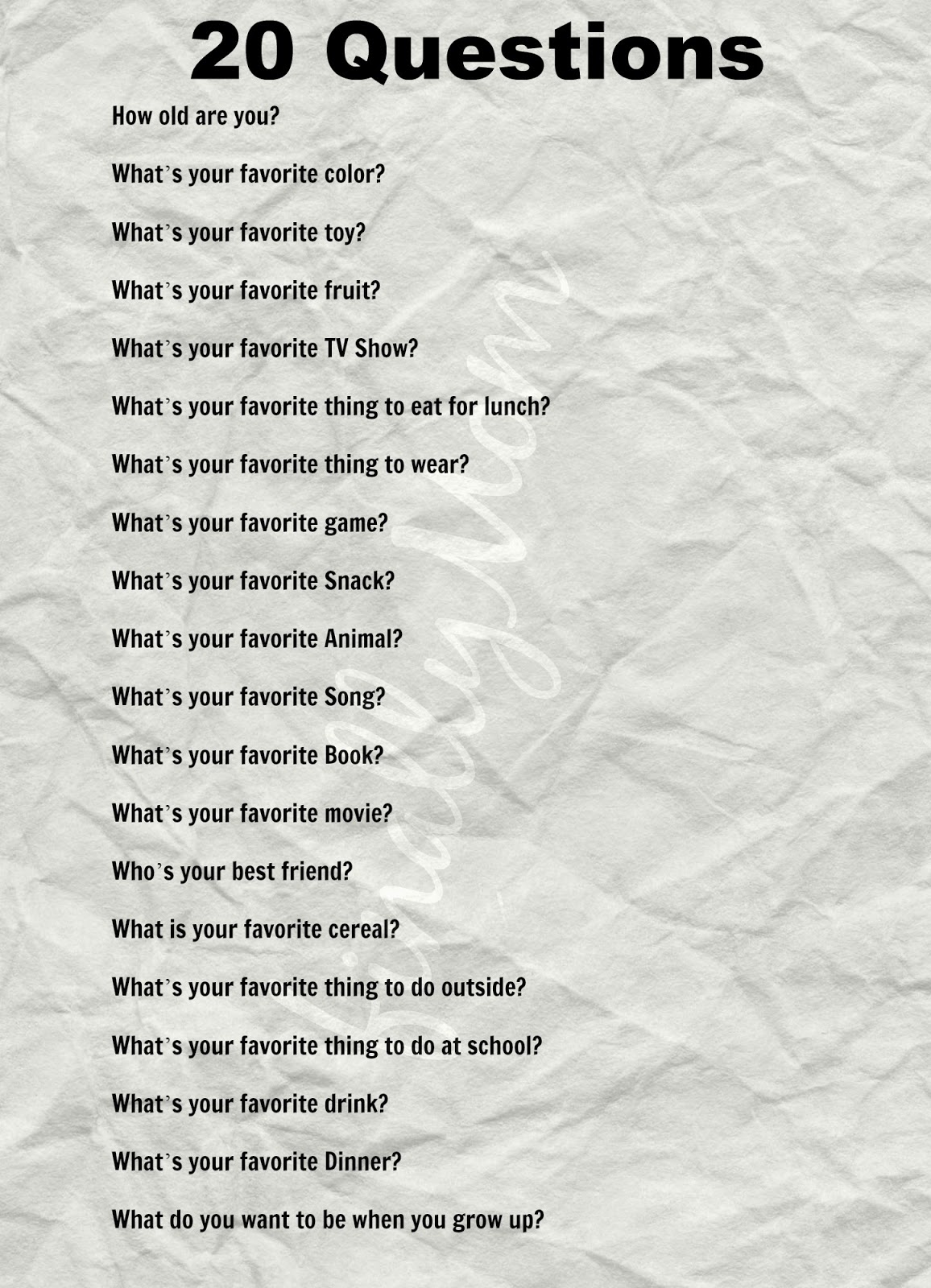 Written by christina at 2:44 PM No comments:

Email ThisBlogThis!Share to TwitterShare to FacebookShare to Pinterest
Labels: interview

December: is this thing on?

not sure if anyone still checks in here or not, but just in case or just in case i go back one day to print stuff out for Lovie, figure i'd update a bit...

Saw Santa the other weekend. Not the mall one but a different one. It was fun. Lovie was excited to see him, Frosty, and Rudolph who she high fived and hugged a bunch. 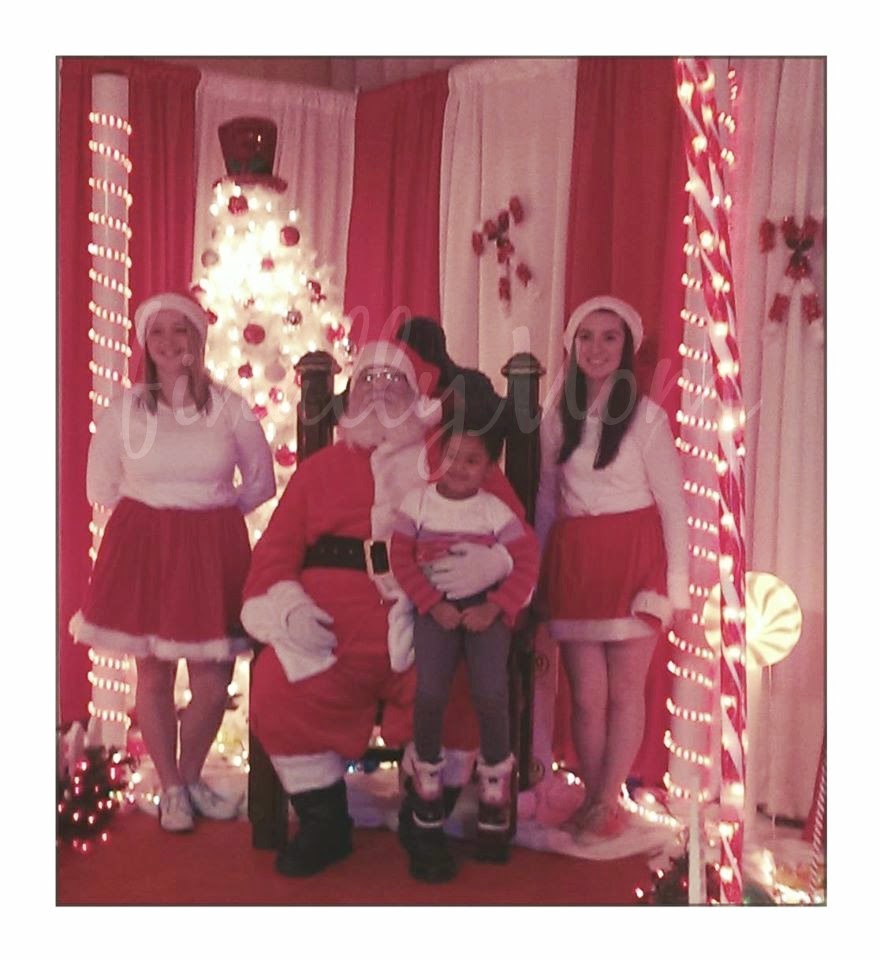 Speaking of Santa, Lovie wasn't feeling so great the other day so we stayed home and finally took advantage of some down time with compiling an official list for big guy. She's come a long way with writing and spelling. I love it so much. I helped her very little-- mostly by just enunciating letters for her to be able to spell with more confidence. 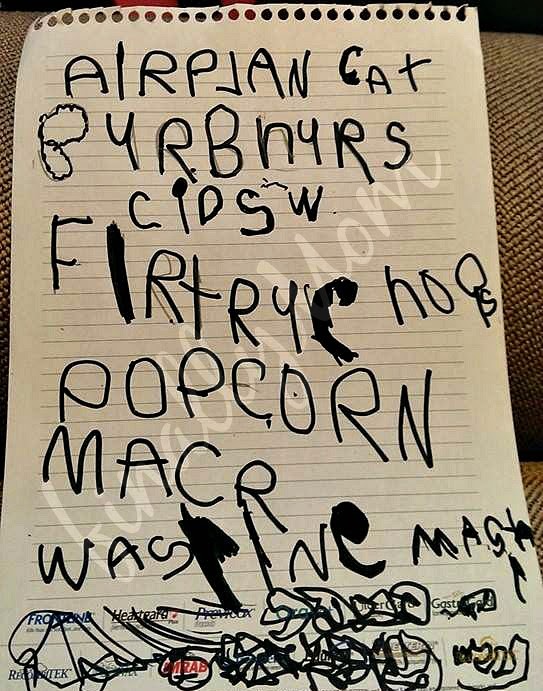 Pretty sure you can make out some of this list... .like AIRPLANE, CAT (toy) on the first line there. The second line is BYRB HYRS (Barbie Horse) and under that is CIDS (Kids- Barbie kids). Not sure about the W. Then she has FIRTRUC (firetruck) and HOOS (house- Barbie). Then she wants a POPCORN MACR (maker) and WASHING MASHEN (mashine).

Been making treats to gift away and found a new, easy, favorite: Chocolate Toffee Christmas CRACKer. Holy shit is it ridiculously tasty. 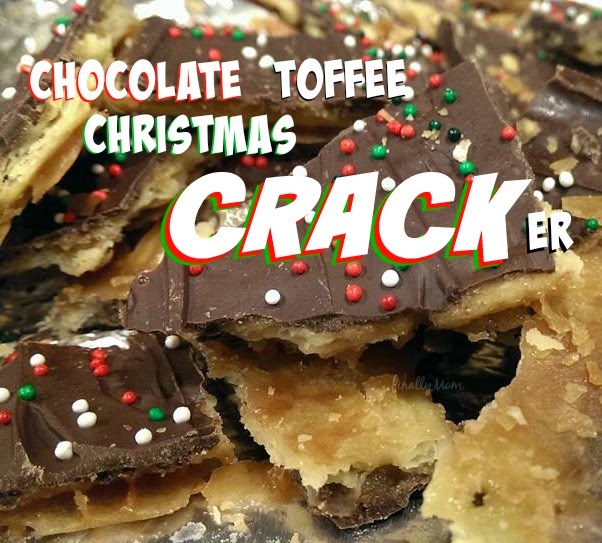 You just layer a pan lined with aluminum foil and sprayed with cookie spray with crackers. Then boil a cup of butter and brown sugar, stirring frequently, for about five minutes after it boils. Pour this atop the crackers and spread a bit. Bake in 400 degree oven till it starts bubbling. Throw on some chocolate chips and let melt, then spread. Sprinkle whatever, if anything, on top. Let cool and holy moly cannoli. I stored it in the freezer thinking it would help keep me away from it... WRONG.

This festive house is a couple streets from us and we love driving by it every night. 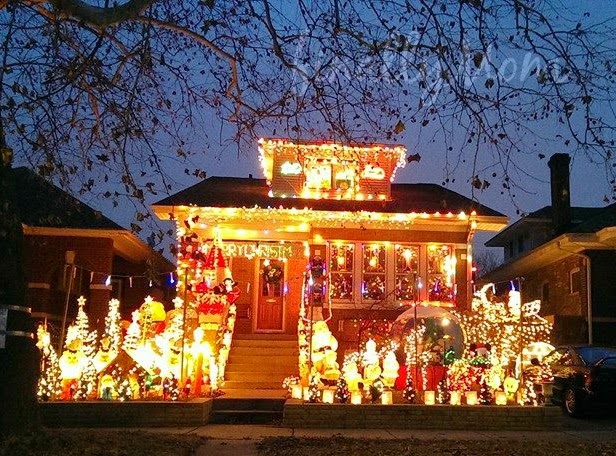 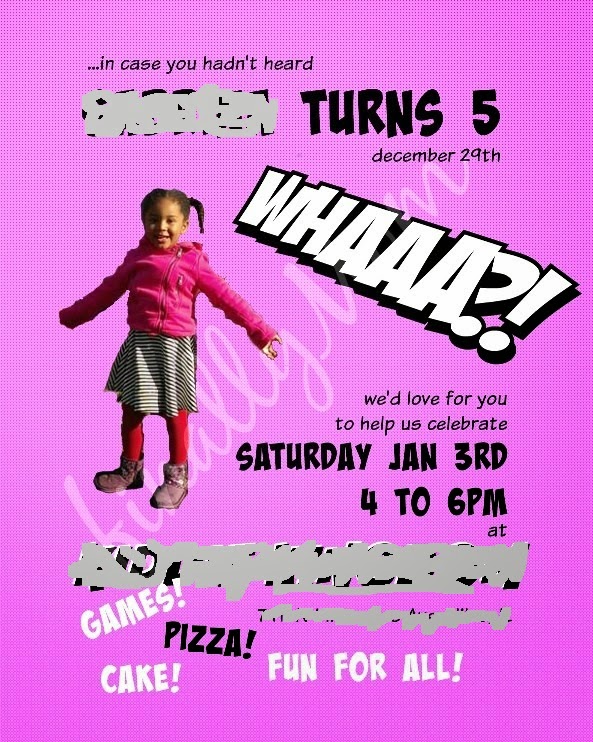 We're actually having two freaking parties for her- one on the 28th and one on January 3rd.

Written by christina at 10:35 AM No comments:

I stopped off at Wal-mart yesterday and spent about $50 on a variety of items to package up into gallon-size plastic bags to hand out to the homeless folk I see nearly every day. After I picked Lovie up from school I told her that I had a project to do in which I needed her help. She was excited and after telling her what it was exactly that I needed her help with, she was even more excited.

After we ate dinner, I had Lovie put everything into piles--packages of tissues in one pile, granola bars in another, socks in another, etc. Then she grabbed one of everything and put it in the gallon-size bag. We made 10 bags and this morning, on my way to work, I already handed one out. It's the least I can do, really. I so badly want to do more- and I want to do more with Lovie by my side to witness it. But at least this is something. (And it's about damn time, too!)


Do you know that after I thanked Lovie for helping me put the bags together she suggested that we maybe include our phone number in the bags so the people could call for more help if they needed? 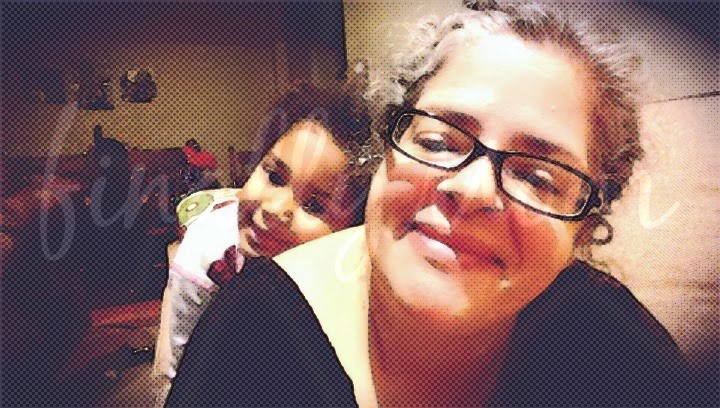 I'm so immensely blessed. I know I say that a lot. I know most of what I post here is rainbows and butterflies, but, I mean, I'm just so blessed.

super proud of my creation for Lovie's birthday party invites: 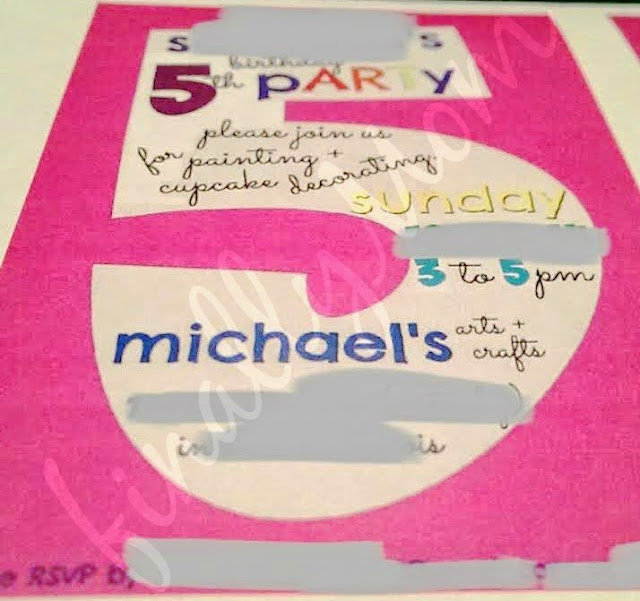 i used the free version of picmonkey (love!).

i'm so ridiculously excited to put the whole shebang together. should be a ton of fun.

Written by christina at 12:18 PM No comments:

year of the princess

One week ago today, we got our first snow of the season. On Halloween. 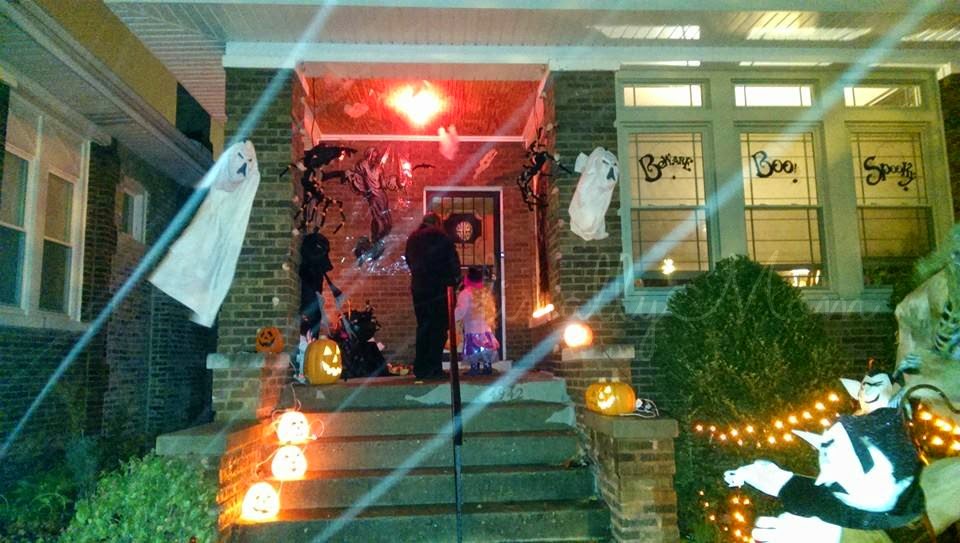 "Remember when it snowed on Halloween?"

Lovie went as Elsa, of course, to school. Here's a picture of her hair after she'd already changed out of her Elsa dress: 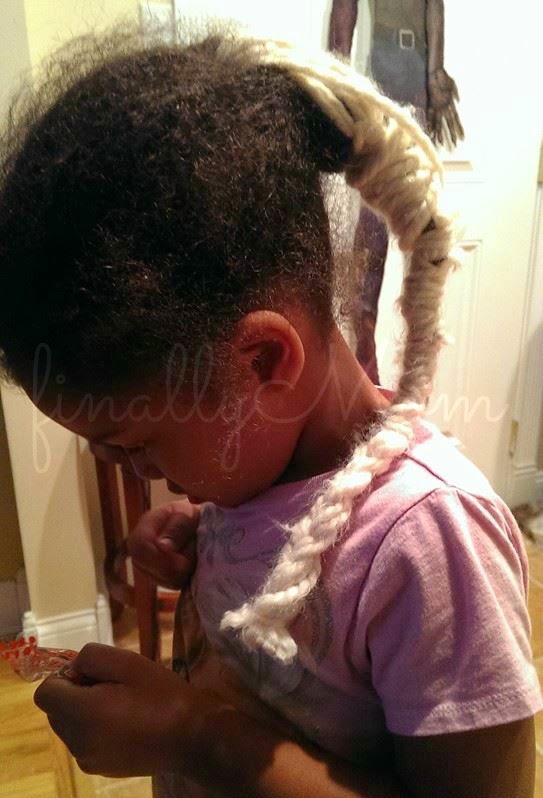 I took ivory yarn and braided into her hair. Looks kind of crappy but she was over the moon to have such a long braid for a day.

When we got home after school, in the dark because SNOW, Lovie changed into her trick or treating costume: 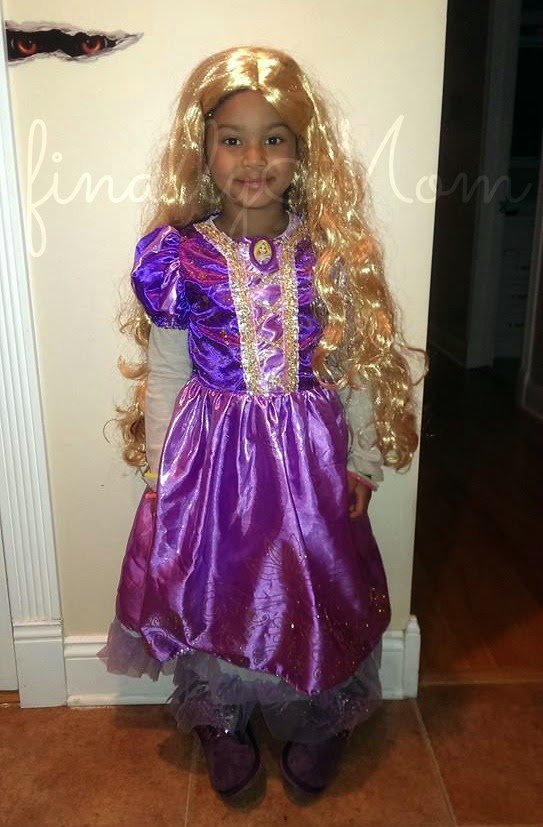 It's funny because she begged us for this costume before last Halloween but ended up going as a pirate then. And this year, despite the Elsa/Frozen craze, she insisted upon Rapunzel.

Honestly, I think it's that it involved wearing a super long hair piece.

Despite the cold, despite the SNOW, we made it to the couple of streets we've been ToTing on for years now and had a good time. 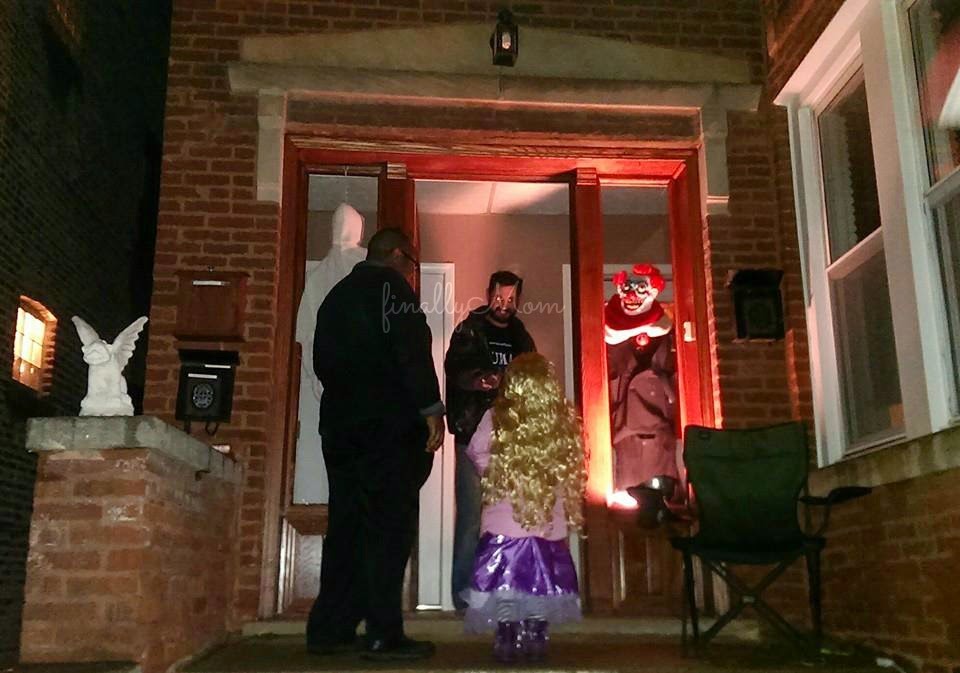 
It's been a while, eh? Almost two months. Nothing much to report on truthfully.

School is going quite well for Lovie. She still loves it. We still love it. Her teacher is constantly telling us how smart she is and the other day she started compiling a list of kids she wants to invite to her FIFTH birthday party (in less than two months #omgholdme). She sat there and sounded out each name and wrote down the letters that corresponded with the sound. I was quite impressed. She's also been impressing me with her reading lately. In addition to sight words and other words she knows from memorization, most of her reading is still figuring out the words with the picture, but she totally gets sounding out the words when I tell her to LOOK at the word.


***
We went on vacation last week. We drove from Chicago to (near) Clearwater Florida. The drive down wasn't so fun. Lovie got carsick twice on the first day. What should've taken us 11 hours, took us 17 that first day. But the second day went much smoother. And of course the time spent in Florida was nothing shy of fabulous. Really and truly. 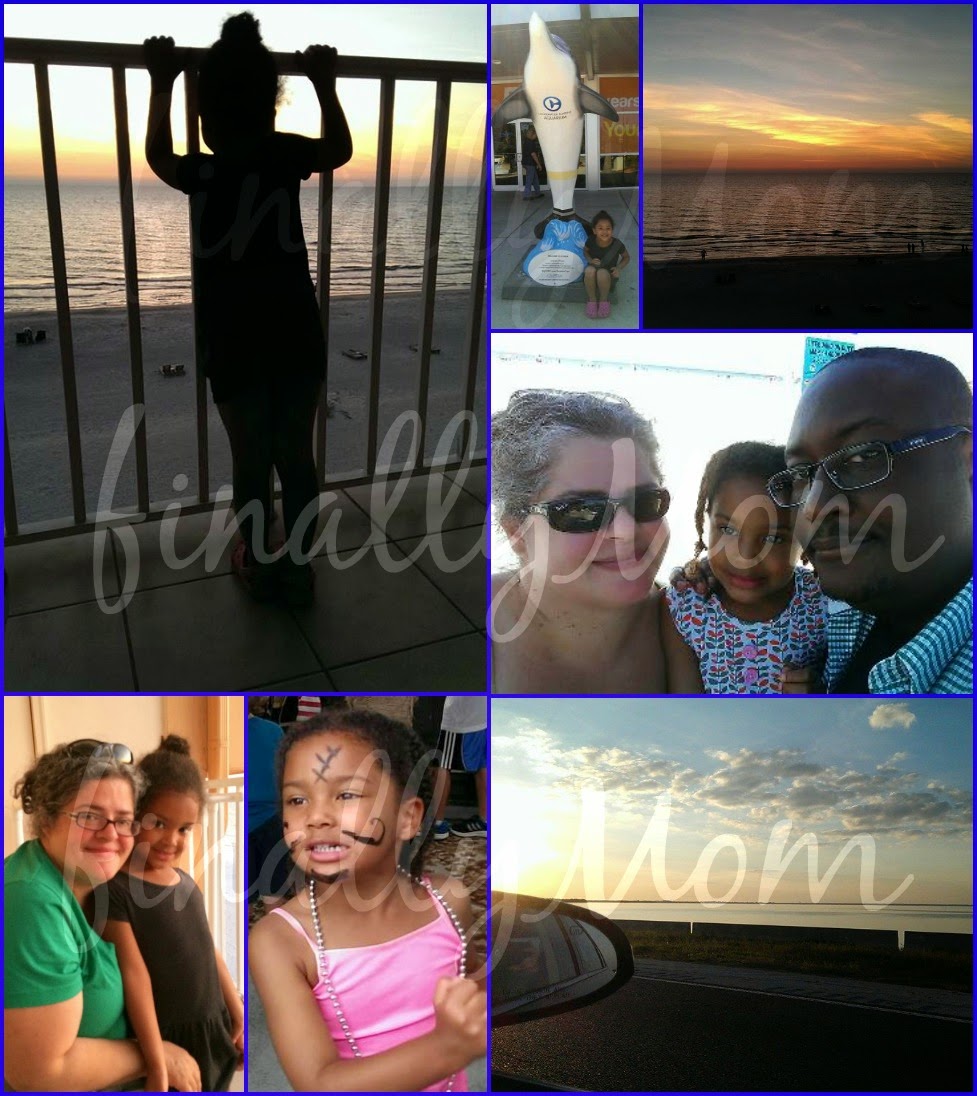 Now I'm generally NOT a sun and hot weather person. In fact, I hate it. But if you can get me right. on. the. ocean. I'm game. And that's what we did. We found a condo to rent that was RIGHT on the water. The view, the price, it was all just too much to pass up. We laid around in the sun and swam in the ocean the majority of the time. We also went on a pirate cruise (which I'd recommend anyone to do- especially if you have kids). On the last day, we left the condo at 10AM (checkout time) and headed to the Clearwater Marine Aquarium... home of Winter the dolphin. 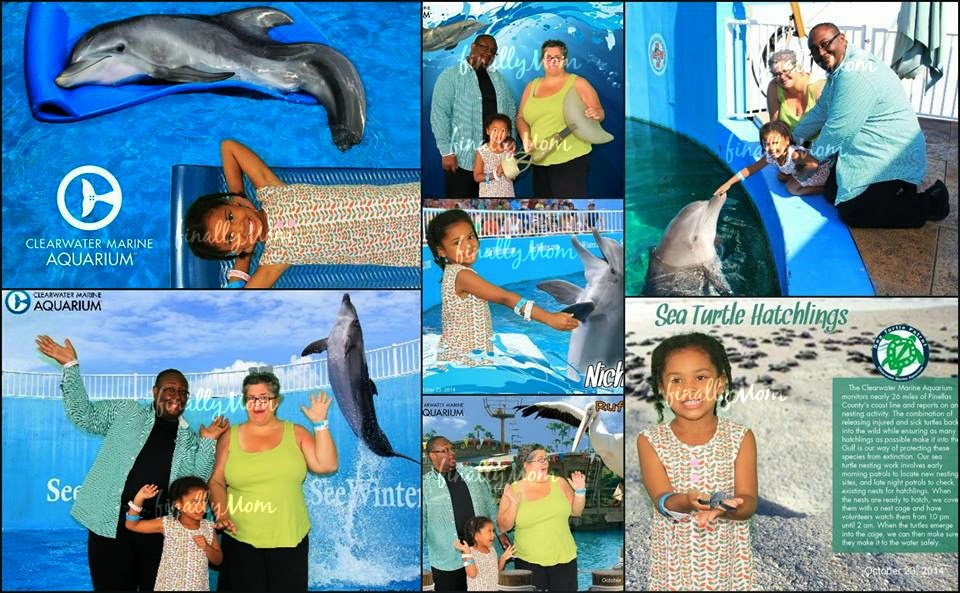 This place was really and truly fabulous, and a great way to spend our last day of vacation. I have never in all my life encountered a place where every single employee was SO nice. And if you've seen the Dolphin Tale movies, you absolutely MUST visit this place with your kids. Worth every penny.


***
Next up is preparing for the holidays and Lovie's birthday (in less than two months #omgholdme). We already know where it's going to be and what we'll be doing, but I do still need to book it. I'm actually super excited about this party as it's not a jumpy house. Not that anything is wrong with jumpy houses, Lovie LOVES them and had her last two parties at them. I just think what we have planned, if pulled off, will be super damn fun and cute and memorable. You only turn five once, right? Why not make it a memorable one?

Written by christina at 2:45 PM No comments:

I wasn’t supposed to be a mom to a girl.

I wasn’t really supposed to be a mom at all, actually.

Not a day goes by that I’m not eternally grateful that not only am I a mom, but I’m a mom to a girl. 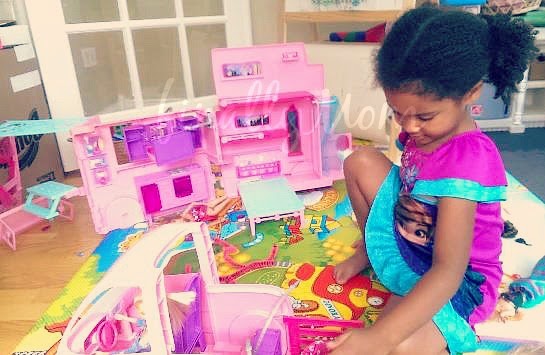 When I found out Lovie was a girl, I honestly was a little disappointed. Not a lot. Not even enough to mention, truthfully; but if I’m honest, I would have to reveal that yes, there was a tinge of disappointment that she would not be a he. It’s just that, in the moment the ultrasound tech told us “it was a girl”, I had this vomit-inducing image of all kinds of pink crap. And high-pitched squeals. And dresses, painted nails, Barbie dolls, etc.

Like I said it was sincerely a fleeting moment that was over as soon as I realized that my baby was HEALTHY and that I was going to finally become a mom.

The first year of Lovie’s life was great. I mean, it’s always been great. Of course, there are always moments when it’s exhausting or whatnot but overall, being Lovie’s mom is the absolute greatest gift I’ve ever been given. I feel like I’m the luckiest person in the world having her as my child. And during that first year of her life when she wasn’t able talk much or have opinions of her own, it wasn’t too difficult to avoid the pink invasion I fretted over when I first learned she’d be a Girl.

Then she turned one. 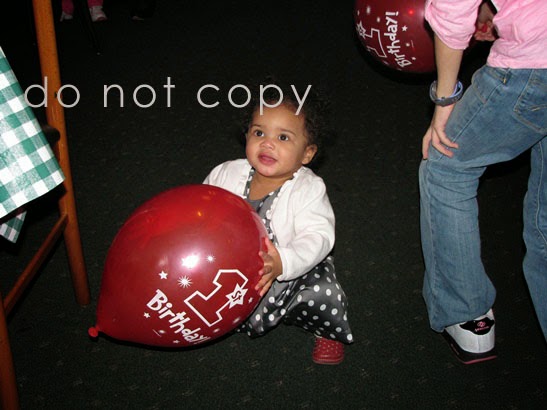 And she got gifted her very first baby doll, which she toted around for months. 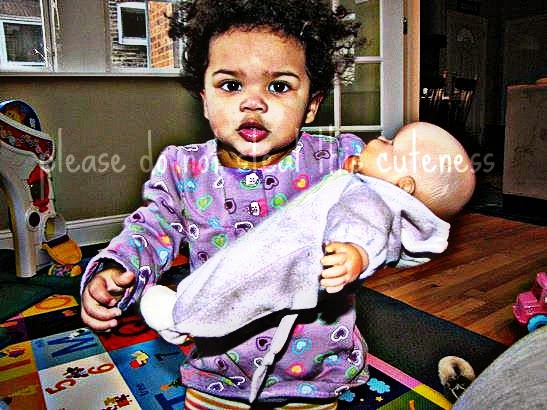 And it was the sweetest thing I had ever in all my life seen: My sweet little baby doll loving on her very own baby doll.

Soon it became clear that no matter how neutral we made Lovie’s surroundings, clothes, toys… she was all girl.

She is all girl. 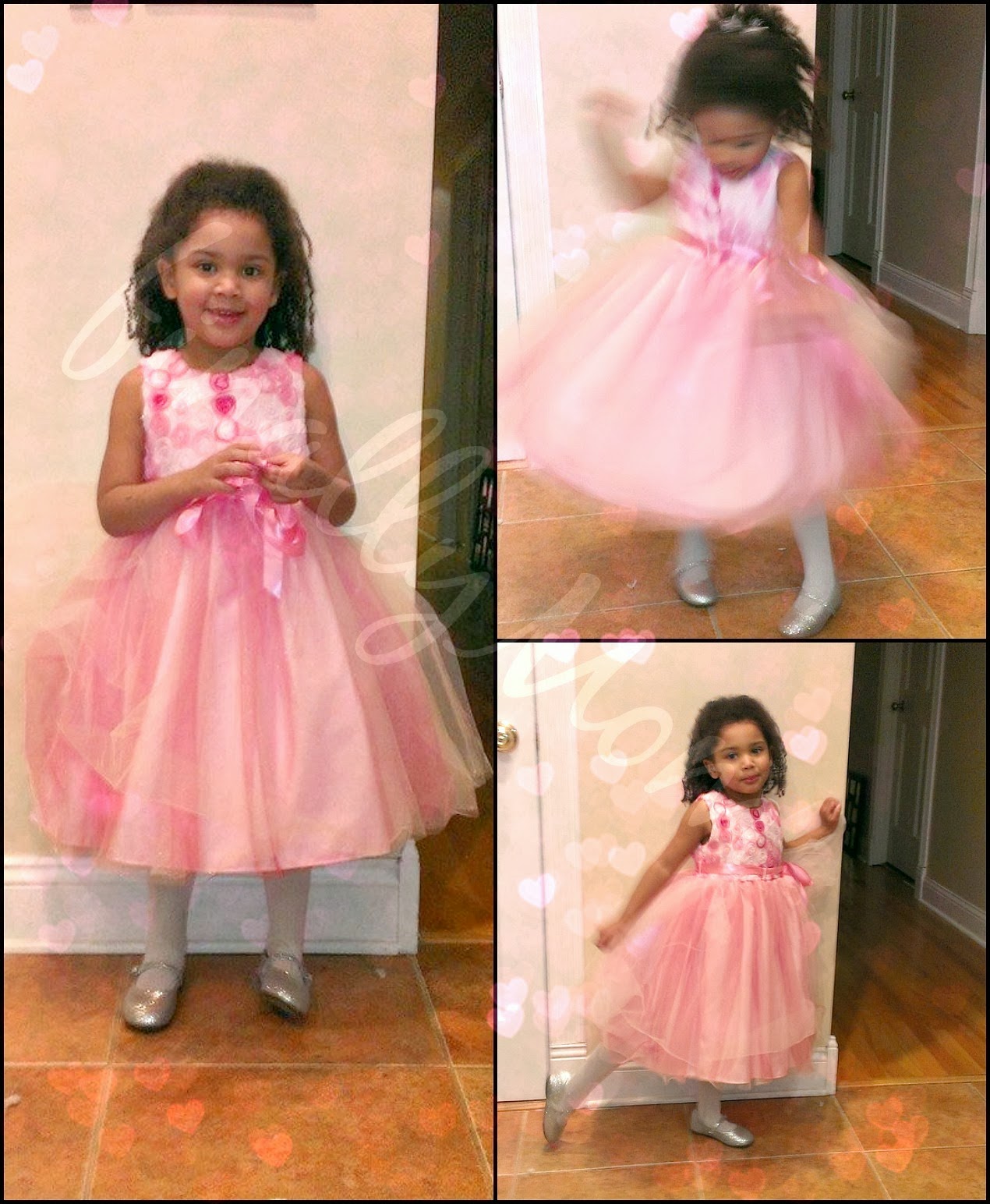 My Lovie is absolutely every single thing I envisioned the moment I found out she was a girl.

Thank God.
Written by christina at 1:56 PM No comments:

under the stars and moon

The other day Lovie asked for help on her journal. Our journal. She asked me how to spell some words, how to write the date. She asked for suggestions on what else to write after she completed the first part:

I love you Mama.
I love you under the stars and moon. 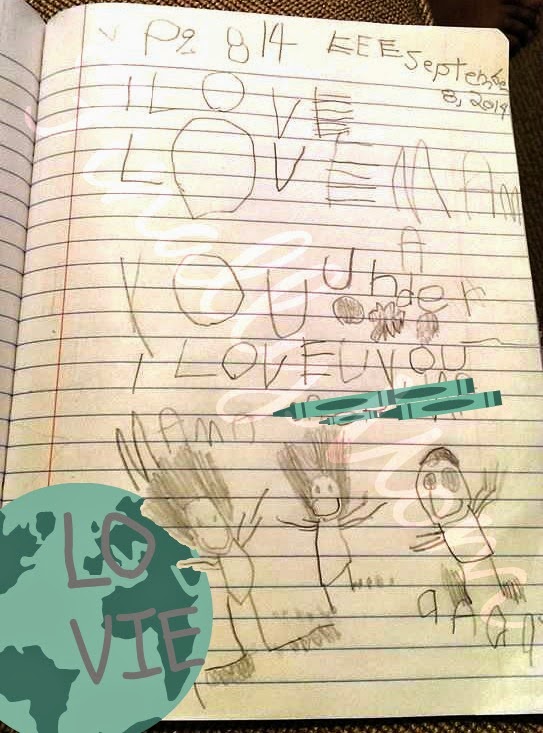 Other than help her spell You and Under (and that there's an E at the end of Love), she did the rest. (The date in the upper right hand corner is my writing--I was writing upside down, which isn't so easy.)

After she was done writing and drawing pictures of the moon and stars, she asked what else she should write.

I suggested she draw a picture.

She then drew me (left) and her (center), then drew Daddy (right).

Originally she drew us without feet so when I asked about our feet, she added them-- including the toes, which made me chuckle as she deliberately counted out five toes for each of us. : )

I'm so glad I decided to do this journal.

Written by christina at 9:53 AM No comments:

Other posts to check out